See the article on Newsday 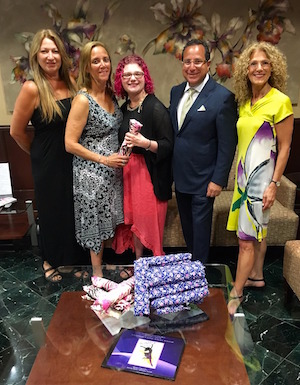 Seaford resident Chelsea Marks got the idea for a padded seat-belt cover to ease the post-surgical discomfort of breast cancer survivors when she herself was hospitalized, under treatment for an infection related to her muscular dystrophy.

It was April, and Marks, 22, had three visitors in her room at Stony Brook Hospital — her mother, Linda Marks, and two of her mother’s friends. All three older women had undergone reconstructive surgery after being diagnosed with breast cancer. The women’s talk that afternoon turned to their difficulties with travel and the discomfort and pain caused by the pressure of seat belts crossing their chests.

Chelsea Marks, who was diagnosed with a rare form of muscular dystrophy more than seven years ago, well knows the challenges of living with the effects of disease and medical procedures. Plus, she has watched her mother, now 50, come back from surgery six years ago.

The conversation was the inspiration for the padded covers that Marks dubbed “Belt Buddies.” Linda Marks recalled the setting and the subject. She and her friends, she said, “all were patients of New York Breast Reconstruction Associates and part of their Sisterhood of Support group. And we were all sitting there — three survivors and Chelsea in the hospital bed — and we started reminiscing about the car ride home. And this is how the idea was born.” Now, about twice a month, Marks gathers with friends and family — including her brother Corey, 15 — around the dining room table.

They cut squares of fabric into rectangles that are stuffed with batting and sewn together, with attachments of Velcro strips. The idea is that the padded covers are wrapped around seat belts in the chest and stomach area so that women recovering from surgery can be more comfortable when they drive.

The Stony Brook University senior and her supporters went through several prototypes before perfecting the design. Marks’ seat-belt covers are among the items included in care packages given to patients at Aesthetic Plastic Survey PC/New York Breast Reconstruction Associates in Great Neck.

Marks, who is majoring in biomedical engineering at Stony Brook with a minor in music, said she was looking to do something on a more grassroots level to help breast cancer survivors. She is applying to several doctoral programs and hopes to work in breast cancer research.

“I saw how much of a difference having someone to help you right there could make, and I wanted to do that for women with breast cancer,” she said. Because of her disease, which causes muscle weakness and atrophy, Marks has limited motor skills and is legally blind. It can be difficult for her to cut the fabric, she said, but she is determined.

“Because of my health issues and knowing what it is like to be in the trenches . . . only makes me more motivated to help others,” Marks said. She also has dyed her hair bright pink in honor of her mother.

Linda Marks recalled that when she was recovering from surgery, she relied on other people for rides or would take a pillow from home to place it between the seat belt and her body.

In addition to Chelsea Marks’ “Belt Buddies,” there are several other types of seat-belt covers available for sale, some made of sheepskin or microfiber. The Marks family tries to give their covers a personal touch with three different choices of fabric. Chelsea and her mother said they would like to make kits that include the materials and the padding and give them to people who can make their own “Belt Buddies” and even distribute them to others.

Visit Chelsea's GoFundMe page to help the Belt Buddies with the expenses of the seat belt covers.