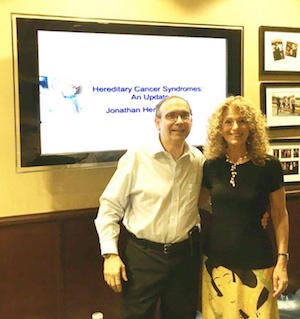 As part of our Patient Empowerment Program’s Be Informed Lecture Series, the practice welcomed obstetrician-gynecologist Dr. Jonathan Herman to discuss Hereditary Breast and Ovarian Cancer Syndromes, or inherited genetic mutations that increase the likelihood of those cancers. On behalf of the practice, I want to express our heartfelt appreciation to Dr. Herman for so generously sharing his time and expertise with our patients. The “full house” was a reflection of his exceptional reputation as a gynecologist and his commitment to educating patients and medical professionals.

As a result of these statistics, Dr. Herman stressed the need for more genetic counseling and testing. He believes there are too many missed opportunities of detecting genetic predispositions to cancer in today’s populations. In fact, the National Institutes of Health recommends genetic testing for cancer risk for people who have a personal or family history that suggests an inherited cancer risk condition. 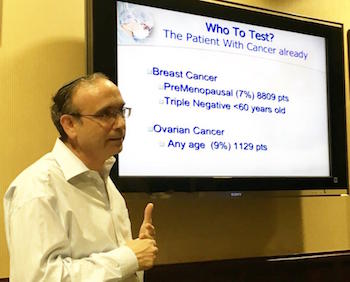 Dr. Herman also highlighted several other ways to reduce the risk of breast and ovarian cancers that include surveillance, chemoprevention and risk reducing surgeries. Breast self-exams are a good first defense mechanism against breast cancer. Clinical exams, ultrasounds or MRI are effective ways to monitor signs of breast and ovarian cancer. In terms of chemoprevention, preemptively taking Tamoxifen can reduce breast cancer risks in BRCA1 carriers, and oral contraceptives significantly reduce the risk of ovarian cancer. The most significant risk reduction measures are with surgery – mastectomy with breast reconstruction reduces the risk of breast cancer by more than 90% and the surgical removal of one or both fallopian tubes and ovaries reduces ovarian cancer risk by 96%.

Accurate information empowers our patients to make informed decisions and is the goal of our “Be Informed” lecture series. With all the new knowledge they received, the group felt more confident in their ability to identify their risk factors and maintain an edge over the C-word. Here are some responses from the group after Dr. Herman’s presentation.

“Dr. Herman was incredible…it’s refreshing to meet such a committed physician.”

“What a sincere presenter. It helped me clarify so many of my questions that I haven’t had the opportunity to ask.”

“Thank you! This practice surrounds itself with professionals, like Dr. Herman, who share the same mindset and treatment approach. You are all unique in these days of ‘controlled’ patient care.”

“It is obvious that Dr. Herman is most passionate about his mission to increase awareness of understanding the hereditary connection.”

If you would like to learn more about Hereditary Breast and Ovarian Cancer from Dr. Herman, contact him at 516-358-1200.