A big smile lights up my face as I think about The Uplifting Event because of all the connections created, those powerful performances and the support given to one another. I was blown away by the love in the room, and I’ve heard similar feelings from others in attendance.

What an inspiration you all are! You continually prove YOU are the Champions!

The spirit of community is something Drs. Randall Feingold, Ron Israeli, Peter Korn, David Light and Jonathan Bank foster in their breast reconstruction practice, and it was more evident than ever before. For instance, someone who was having reservations about attending the event by herself told me, “I walked in not knowing anyone and left with 20 new sisters. There was an instant reaching out, warm, and connection.” Similar sentiments were shared among the Magnificent Models. They described an instant bond with one another and were swapping stories like soldiers sharing combat stories from different battles. Brotherhood of Support pals were seen greeting each other with bear hugs.

I overheard a spouse commenting, “The energy and love in this room is palpable!” Afterward, spouses and partners shared with me that they better understood the significance of the Patient Empowerment Program and helped to put the depth of the emotional journey into better perspective. 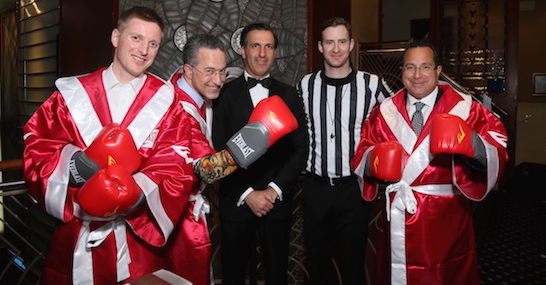 Of course, none of this would be possible without our gracious hosts and magnificent doctors, Drs. Randall Feingold, Ron Israeli, Peter Korn, David Light and Jonathan Bank. What began six years ago as an idea to hold a celebration of their patients, has grown from 50 people in the practice’s conference suite to 330 brothers and sisters in the beautiful Chateau Briand. This year's venue was completely decked out to reflect the "You Are the Champions" theme with the stage set up as a boxing ring. Dr. Light guided us through the evening as Master of Ceremonies, Dr. Bank was the Referee to make sure everything stayed above the belt, and Theresa Scolaro, PA, was the Card Girl in between rounds. The Magnificent Models strutted down the runway and across the boxing ring holding cards indicating their respective years as thrivers. Each model received incredible support from the audience, especially a 9+month pregnant woman and one of our male patients dressed in a Superman shirt…so well deserved. 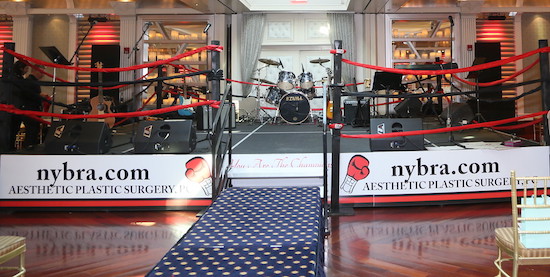 We were also treated to some wonderful musical performances. Starting the evening on the right note, Dr. Israeli’s son, Alec, played jazz classics on the piano during the cocktail reception. The transition to the formal program was surreal when the performers entered to the “Rocky” theme song in the red boxing robes. Then, the crowd’s energy level went through the roof with the “Eye of the Tiger” and “We Are the Champions” performances by singers Jen Grabowski, Kate Corrigan, Lisa Niebling, Linda Marks and music from The Band - Drs. Feingold, Israeli and Korn played keyboard and guitar along with Nik McEnerney and Kenny Strobel on drums. I sang my heart out for you with “Fight Song.” And singing the event’s traditional ending song, “You’ve Got a Friend,” Jen and Kate’s moving rendition had us all singing and embracing the moment. 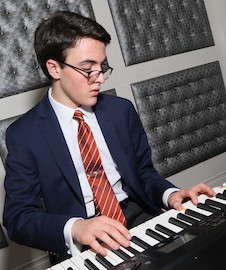 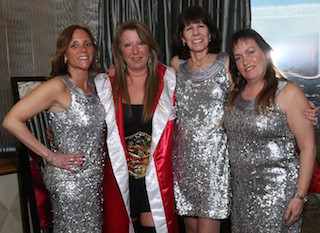 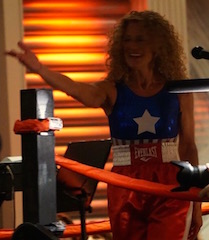 This was the second event during which individuals were recognized with the Sisterhood of Support Awards for their impact on the practice’s patient community. Sisters, Mary Mahoney and Terry LoMonte, both RNs with the Northwell Health System, have facilitated workshops to produce the femPower Belts given to patients pre-operatively to hold their Jackson Pratt drains. They continued to be dedicated to providing this meaningful item. Joyce Davis, RN, Nurse Navigator at Huntington Hospital Breast Center, also received the award for her unique commitment, sensitivity and caring to patients undergoing mastectomy and reconstruction. 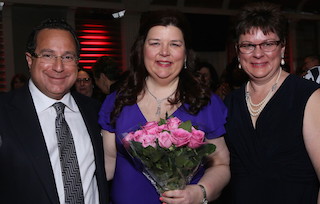 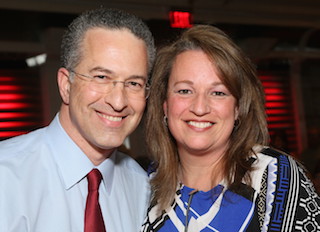 Last but certainly not least, your generosity and support raised more than $14,000 for the Breast Cancer Awareness Fund, a program of the Plastic Surgery Educational Foundation. In other acts of altruism, the Step and Repeat memento photos on the red carpet were a gift from Gil Sacks of JoArt Photography, a patient’s grateful spouse who wanted to give back something meaningful after his wife’s surgery. Hopefully everyone also received their gift bags with the new toxin-free skin care line, Beterre Skin Care, created by thriver Gina Maisano, Dr. Feingold and Dr. Israeli.

Thank you for a memorable, uplifting evening!